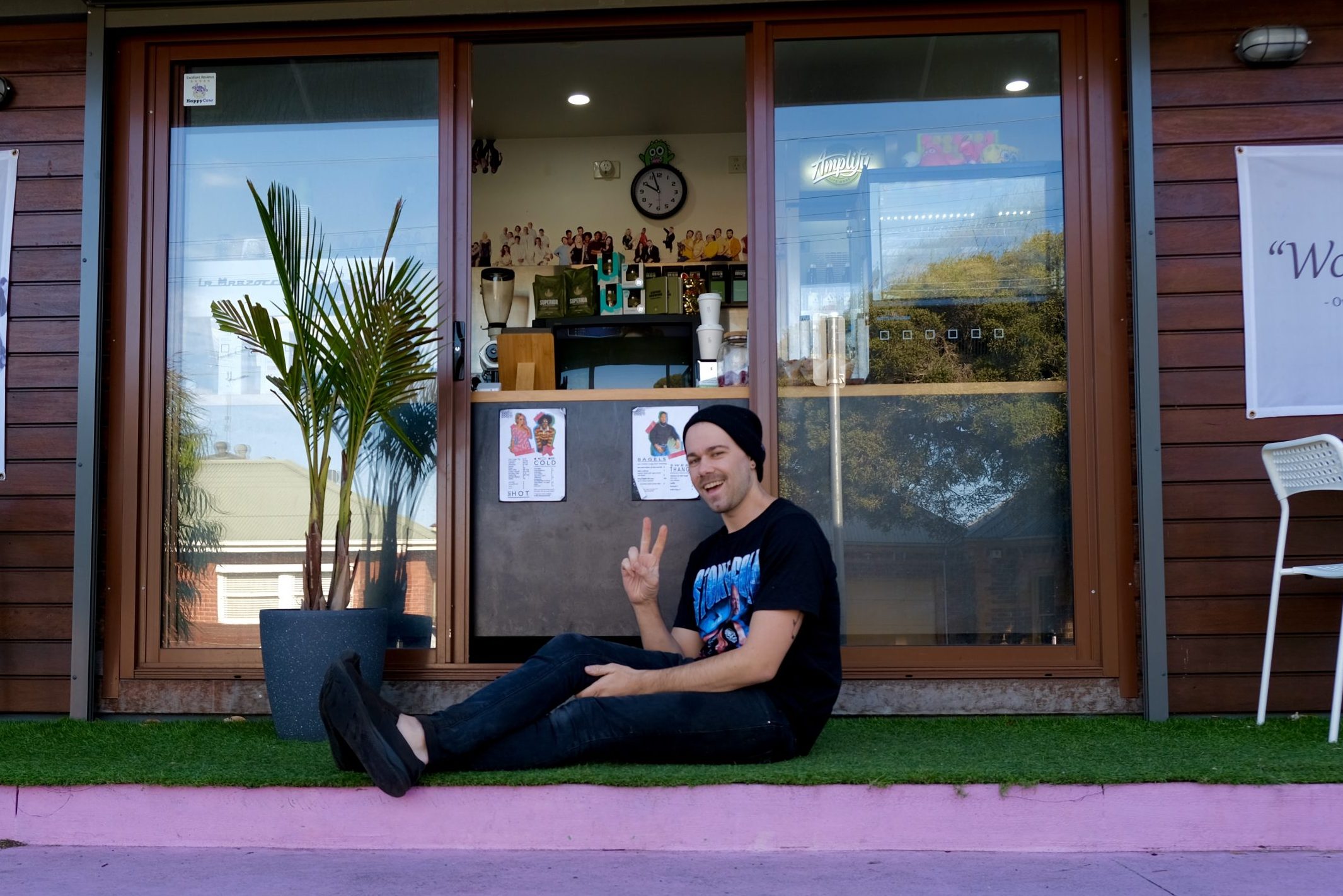 Whether it’s a plain, sesame or an everything bagel you’re after, Cool Cool Cool café has you covered.

Nestled in a tiny hole in the wall location, Cool Cool Cool Cafe has become an institution for locals and a destination for visitors since opening back in March last year, just prior to the Victorian lockdowns.

Located off Yarra Street, the South Geelong cafe is an unpretentious hideaway to enjoy great coffee, good vibes and even better plant-based bagels, with owner Cohen Johnston creating a lively yet intimate setting for his ever-changing customer base of lovers of a quick brekky fix.

“My regulars have been ever-changing due to people having their schedules thrown out the window and then back through the window. I’ve serviced the commuter crowd, then lost them, the home office studs, the day-care drop-off dudes and dolls, and I’m just now starting to receive bulk office orders.”

With a passion for coffee and a preference for tiny venues, Cohen first explored delivering caffeine and plant-based bites back in 2017 with Humans Drink Coffee which he opened with his then lady-friend, and saw them operating out of a trendy retro yellow and white trailer in Armstrong Creek. Serving up specialty coffee in a unique, mobile fashion, the business sadly became unsustainable, leading Cohen to explore his passions elsewhere.

“Fast forward a couple of years and I’m pouring bean juice in another coffee van at South Wharf, we’re looking at opening an additional location together, I get impatient and see that the Mister Crunch space is still empty (plus a lot closer to home) and the rest, as they say, is a thing that happened,” he reveals.

Taking the ‘hole in the wall approach’, being the sole captain of the Cool Cool Cool Café ship was a source of inspiration when it came to choosing the small-scale location of the café, with the selling points being lower overheads, quick service and is easily manageable for one or two people. Of course, nothing comes without challenges, especially when starting a business at the height of a global pandemic.

“I had a bit of a rubbish year personally, and it sucked not having someone here for a little banter and to distract me from my own brain. But as a twist on the old bartender cliché, a few of my customers have let me use them for free therapy, which was so Raven of them,” Cohen explains.

“Special shout-out to my neighbour Johnny, who spoke bollocks with me on the reg and watched the drama of my daily life unfold from his kitchen window. He’s since moved to Highton and I can only imagine how dull his life might be. Also, stock control on my own is annoying. To say that I’m not the most organised person in the world is akin to saying corona season hasn’t been the most convenient time to plan a wedding. But mostly the loneliness thing.”

While Cohen admits there’s loneliness involved with starting a ‘hole in the wall’ business when the state’s self-isolating, he’s passion for hospitality shines through in what he’s created. Taking over the former coffee and toasties Kiosk Mister Crunch, the same place Cohen designed the logo for back in 2018, things have come full circle, with the Cool Cool Cool Cafe maintaining the same minimalist feel, but with unapologetically good vibes and light-hearted decor that breathes life into a Sunday morning brunch. From the ‘wow’ poster out front and the bright coloured logo, to the pink pavement, posters of boy bands and lush turf, the aesthetic of the café is simple, inviting and equally as impressive as the food, promising to bring customers back time and time again.

“To me, hospo isn’t rocket science. Make a good product, do it consistently, and create an atmosphere in which you’re distracted from the mundane. Even just for a minute or two,” he says.

“I spend so much time here that I need it to feel fun, for the sake of my sanity. I also have a different music theme every day. Today is swing/jazz Wednesday, which confuses people because there’s an NWA banner hanging out front, and that doesn’t quite scream throwing on a tux and exercising white privilege. Some days you’ll get LL Cool J and other days your soul with me soothed by the sweet sounds of Norah Jones. That’s the real reason people keep coming back – musical variety.”

Producing some of Geelong’s best bagels, hands down, full-stop, the Cool Cool Cool cafe menu was inspired from Cohen’s time in Canada, which saw him eating these circular baked goods on the reg, “because I was poor and they were pretty cheap. But also, they’re delicious.”

Bringing his own take on the much loved (and very versatile) breakfast food to Geelong, these bagels are a hidden gem that, once uncovered, you’ll never forget about.

And best of all, these stuffed-to-the-brim bagels are entirely vegan and vegetarian to cater for all needs. From the never-fail schmeared poppy seed to a ‘Fat Tony’ (complete with house-made marinara sauce, plant-based pepperoni, mozzarella, red onion and rocket) or the VLT (vegan BLT), Cool Cool Cool cafe is some hole-y takeaway.

There’s also a range of plant-based muffins baked daily, house-made banana bread, brownies, balls, bars and even sugary cinnamon and raisin bagels for the sweet tooths out there.

Serving Campos Coffee for all your cappuccino and espresso needs, you can get your hands on every kind of hot brew, alongside ice-cold drinks with the option of oat, soy or almond milk. Cohen even makes an indulgent vegan-friendly Biscoff latte for fans of an infusion of Belgian cookie buttery goodness in your next milky boy.

Never fear though, if being entirely plant-based isn’t your thing just yet, Cohen does have you covered with some non-vegan alternatives.

“I feel like I need to disclose that I do offer dairy milk – I’m no high and mighty vegan saint. But I do encourage people to get woke and give it a go.”

And while meticulously providing locals with consistently smooth coffee, Cohen has endeavoured to source products from the local region, including the likes of La Madre bakery, Matt over at Sungold, and Adelia Fine Foods.

“Vegan alternatives that don’t taste ‘fake’ are a little harder to source locally, so for those, I need to go a little further out. Like, to the supermarket,” he laughs.

“Guys, there’s so much meat-free meat at the supermarket now. Try a few, don’t be afraid. Do it for the chickens.”

Open from 7.30am Monday and Tuesday, and 6.30am, Wednesday through Friday. Cool Cool Cool café proves it’s never too early for a bagel and a muffin.

Head down to 223 Yarra Street, South Geelong to see what all the fuss is about.